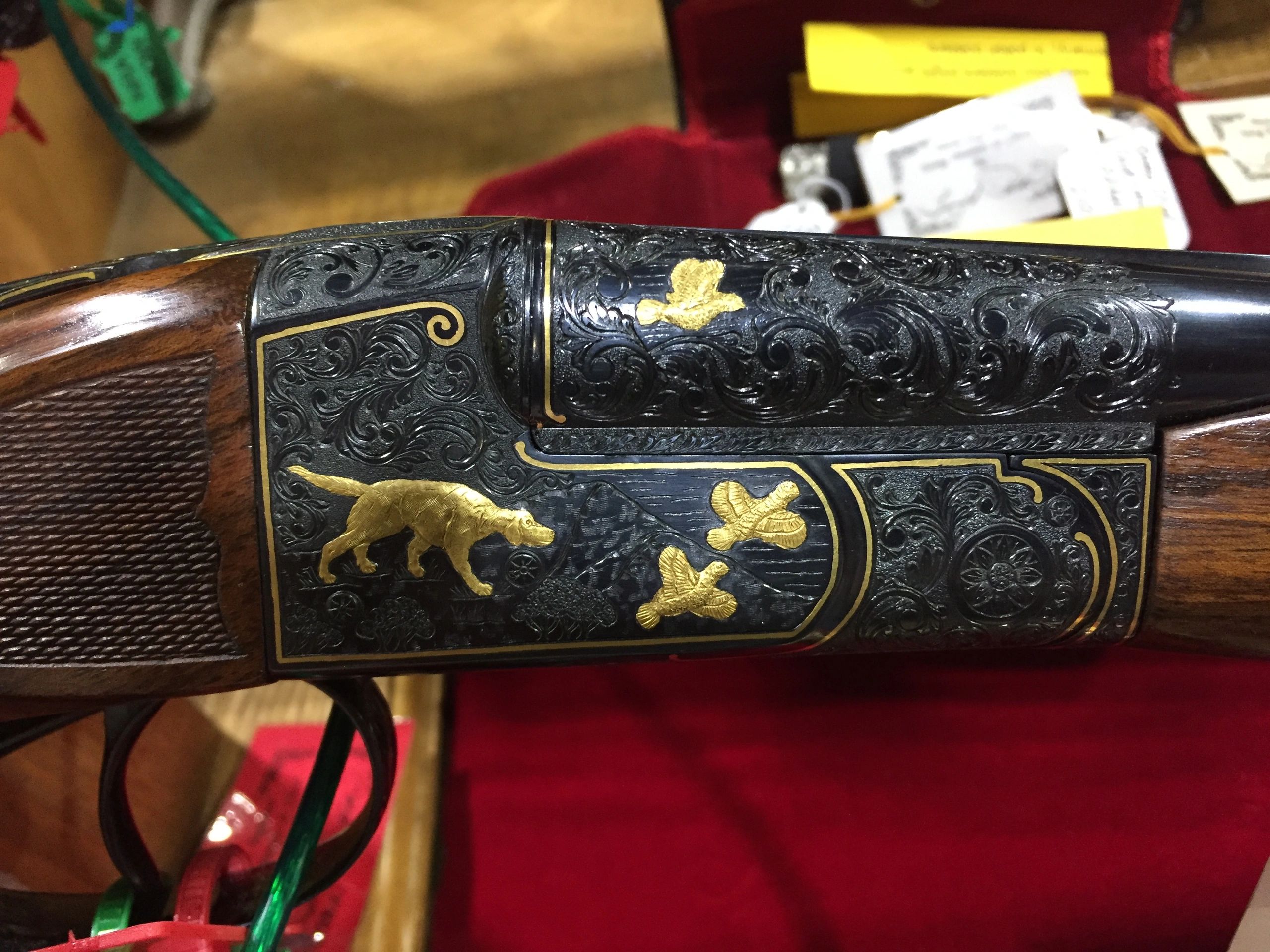 The Hammer and Chisel Engraving of LARRY A. PARKER

BE SURE TO KEEP SCROLLING DOWN TO THE BOTTOM!

How did he get started?

Larry started building muzzleloaders in 1958. Unlike today, where you can buy a muzzleloading kit ready to assemble, back then it was all from scratch. You had to take a blank of wood and carve it into a stock, find a barrelmaker and get a barrel, find locks and triggers and them inlet them into the wood. Larry did all this and sometimes even worked on his guns in high school shop class. Ah, the good old days. Anyway, he became very good at fitting the metal pieces to the wood and soon gained the reputation as one of the best wood to metal fitters in the country. He used his muzzleloaders to shoot in local competitions and soon his friends were wanting him to build rifles for them. With these rifles, Larry and his friends became supreme marksman often winning every shoot they competed in. So much so, in fact, that they were often asked not to compete to allow other shooters a chance! Larry also won awards for his craftsmanship at places like the Dixon's Gun Maker's fair in Pennsyvania where he took 3rd place in the Master Division for a flintlock pistol in 1990 and Best of Show for a contemporary Hawken style Muzzleloader in 1991. (This award winning pistol is shown below in the photos. It's the one in the case.) Making these rifles led him to start building modern high-power, bolt-action rifles. After years of custom rifle building, and a few pistols as well, he took interest in the fine art of metal engraving. He always says, "Engraving is something that you can't learn from a video or a book." So, he took courses at the Rochester Institute of Technology and Montgomery Community College under Master Engravers such as Ray Vira Montez, Lynton McKenzie and Niel Hartliep. Those instructors have all passed on but have left their legacy in the hands of their students like Larry. An NRA lifetime member, Larry has set up his engraving bench and a display of his work at 16 Annual NRA Conventions. The latest was in Indianapolis, IN in 2019.  At these events, his dynamic display allows patrons of the event and other exhibitors to watch as he taps on metal and engraves during the show. At this busy event, it's remarkable to witness these folks hear the tapping of his hammer, recognize where the sound is coming from, then make their way over to his table. There they watch as he engraves knives and other items with a hammer and chisel. They marvel as they realize that the rifles, knives, pistols, and tomahawks on display beside them were all done the same way- one tap at a time.

Today, at 77, Larry is still engraving and he and his wife Alexa run a firearm store and a safe business selling and delivering gun safes to customers all over Ohio, West Virginia, and Pennsylvania. He is active in local Friends of the NRA banquets and often engraves knives for their auctions.  If you're in the area and want to meet this Master Engraver, swing by during business hours. He's passionate about this fading art. If he's got time, and you're persuasive enough, he might even get you started in engraving.

A master at work

Full coverage Ruger Slabside click on the image for a larger view...

- Tomahawks and Knives - click on the image for a larger view...

ARROWHEAD RIFLE .50 CAL made by Larry

1851 NAVY COLT and .40 cal percussion derringer and other peices

lARRY'S bROTHER wAYNE was tasked with keeping a sharp eye on the display racks at nra and other events while Larry engraved. Wayne passed away in 2016

A great video by ShootFastFun...

Larry has been featured on the covers of national magazines, videos, and newspapers...

For larger print or bigger pictures, right click on the image and select open page in new tab. Then, use your control key and mouse wheel to increase and decrease the font size.

In 1990, Larry lost his only son Arik A. Parker. Arik was killed in a tragic accident at a country music festival near his hometown of Belmont, Ohio. He was 24 years old. As of this writing, that was 29 years ago. He is still sorely missed today.

Possibly, as a way to grieve over the loss of his son, Larry took his son's Model 98 BB gun and meticulously engraved it in full. It took him 6 months. On one side in 24 ct gold is the "END of the Trail" figure depicting a Native American on Horseback. On the other is the figure of a cowboy on a bucking bronco known as "Let 'R Buck!". Also in gold inlay is the lettering "Arik Parker- His Gun- 12-12-65 to 07-22-90". It is most probably the only hand engraved and gold inlaid BB rifle the world has ever known. Arik's old 98's home is now in the Buffalo Bill Historical Center in the Cody Firearms Museum in Cody, WY.

Larry has 2 pieces in that museum. The other is a Steven's Model 72 Rifle.

-Remember the award winning flintlock pistol mentioned earlier? It was built as a Christmas gift for his son only one year before.